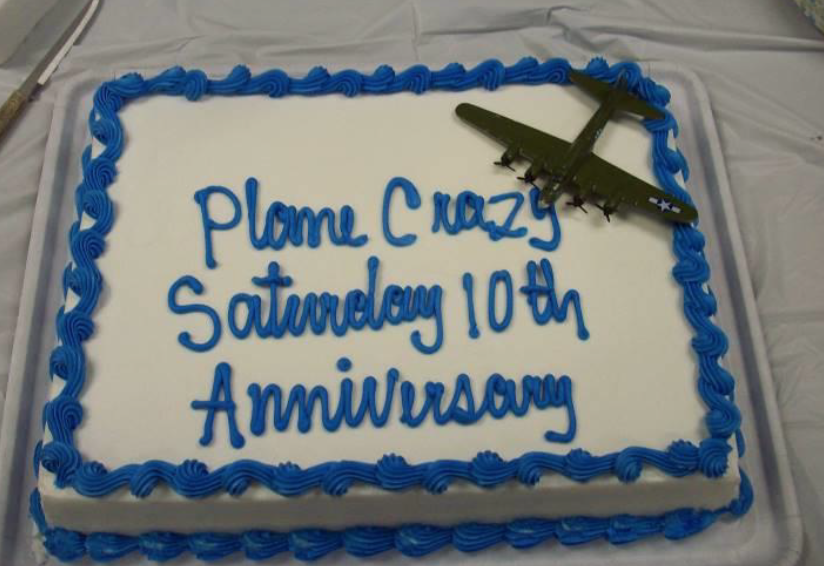 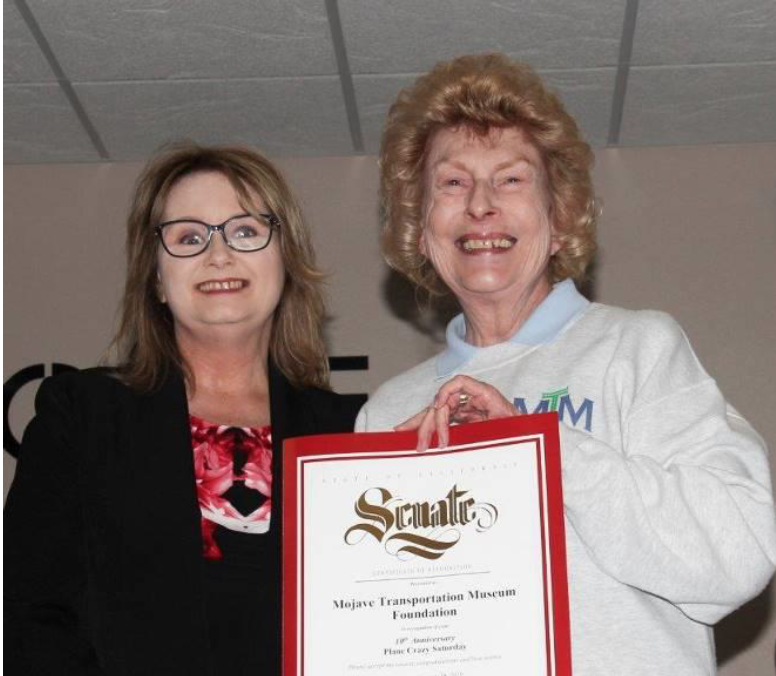 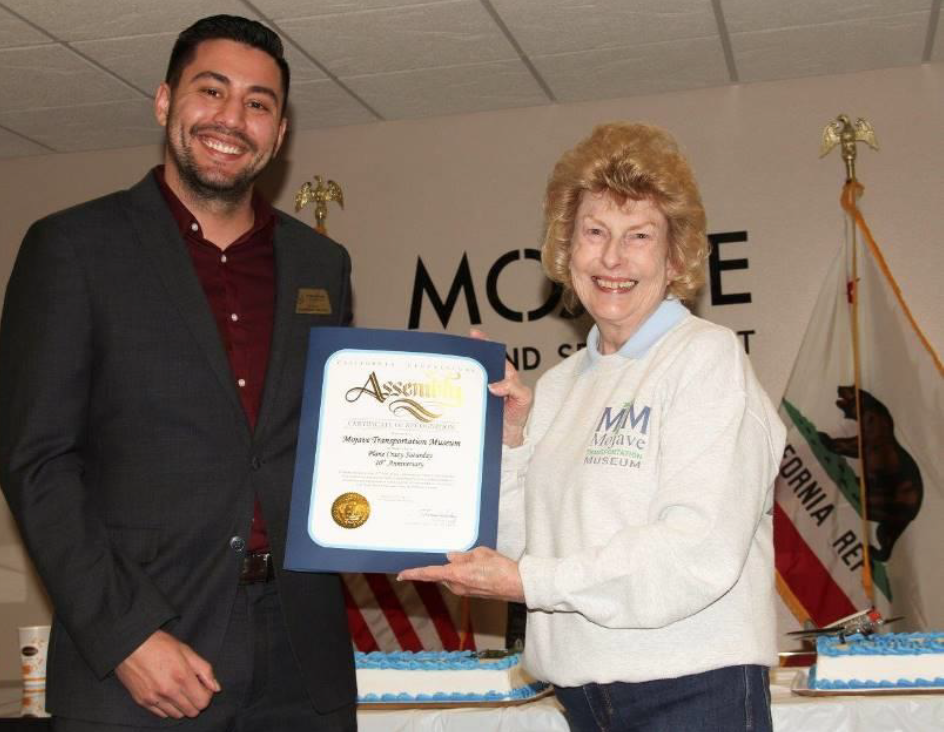 Assemblyman Lackey also gave Joe Biviano a Certificate of Recognition for his accomplishments as a test pilot and 50+ years of flying. 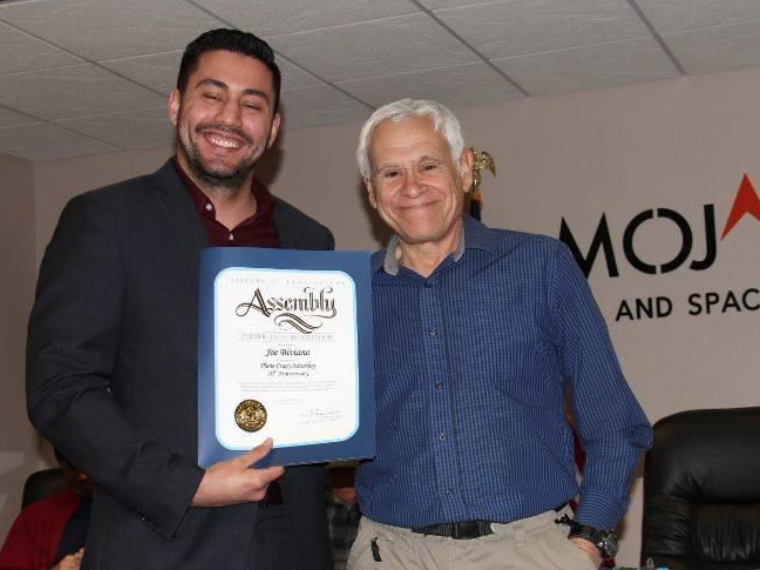 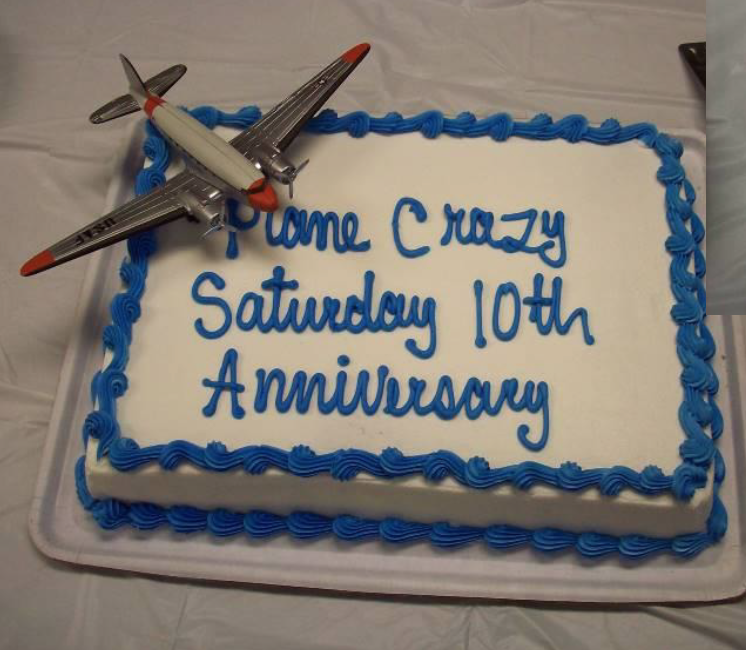 Sparks Aircamper N11MS was built in 1972. Its construction number is MS1. It has been registered to Scott Liefeld since February 10, 1998. 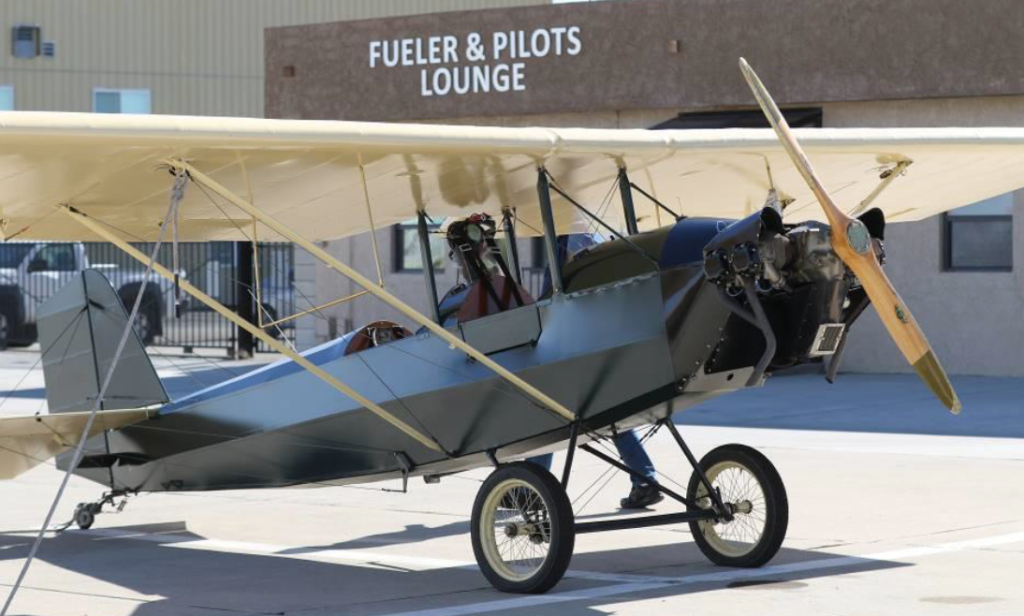 Scott Liefeld and Ed ‘KTOWN’ Knouse brought their sweet Pietenpol Air Campers out for all to see. They even did some flybys!

Ed’s Pietenpol has a Chevrolet Corvair car engine, while many Pietenpol builders choose a Continental A-65 to power their aircraft. In 1928, Mr. Pietenpol built and flew an airplane of his own design with a Model A Ford engine. 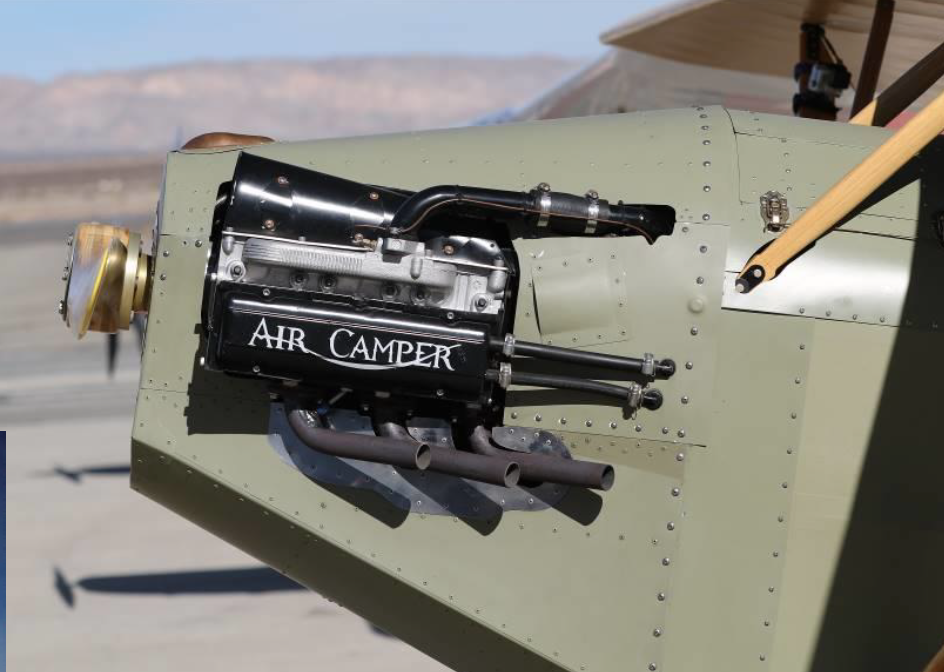 When Chevrolet introduced the Corvair automobile in 1960, it was powered with a flat six cylinder air-cooled engine. It seemed a good candidate for a low cost, reliable engine to replace the Ford A engine. Mr. Pietenpol built two more airplanes, one in 1960 and another in 1964, both powered with Corvair engines. Pietenpol lengthened the fuselage to compensate for the lighter Corvair engine.

Doug Triplat flew his Mooney M-20 over from Rosamond Skypark and enjoyed the great flying weather! 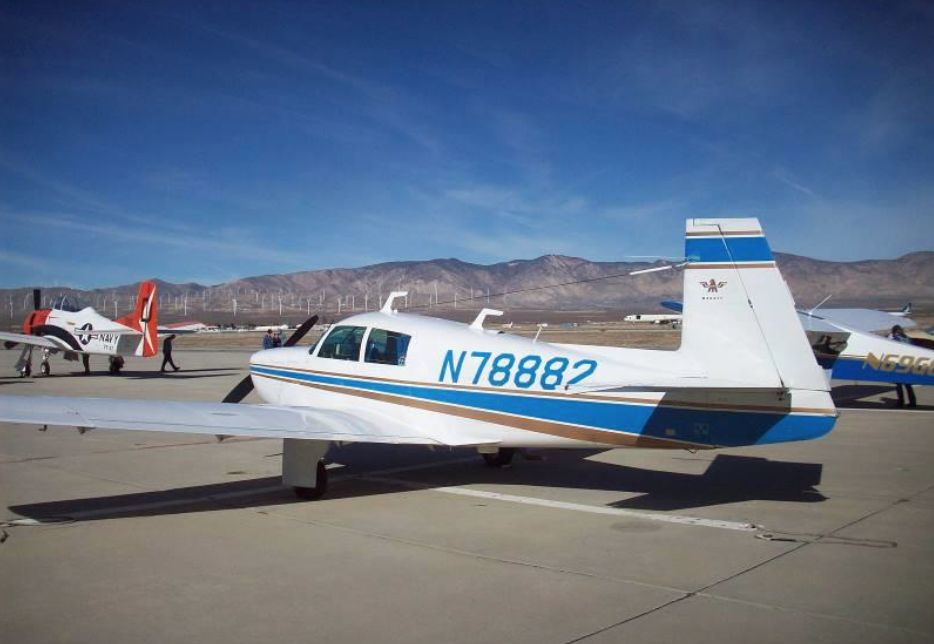 Thank you Bill Deaver, Ursula Finkbeiner, Steve Rushford, Sally Kendall and Julia Pengilley for being so wonderful to volunteer each month at Plane Crazy. Everyone loves visiting with you! 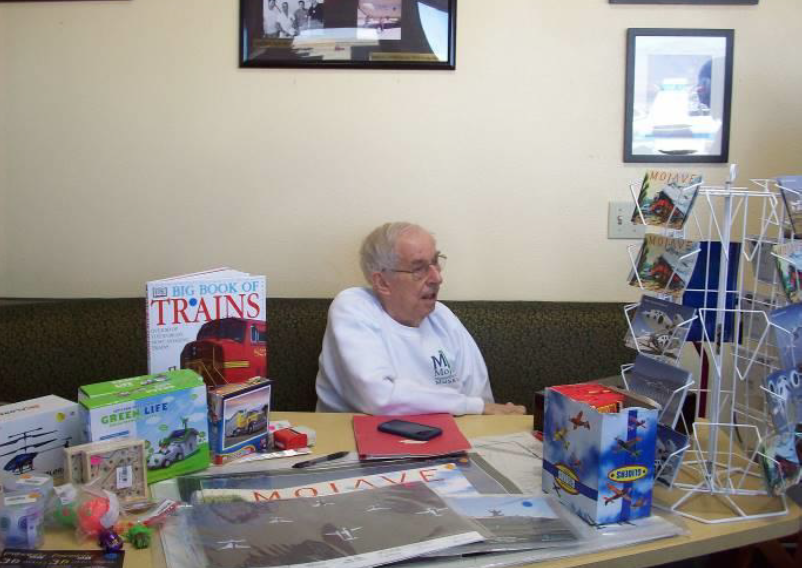 Check out this sweet little 1976 Taylorcraft powered with a 100 h.p. 0-200 Continental engine. Love the font of the N-number! 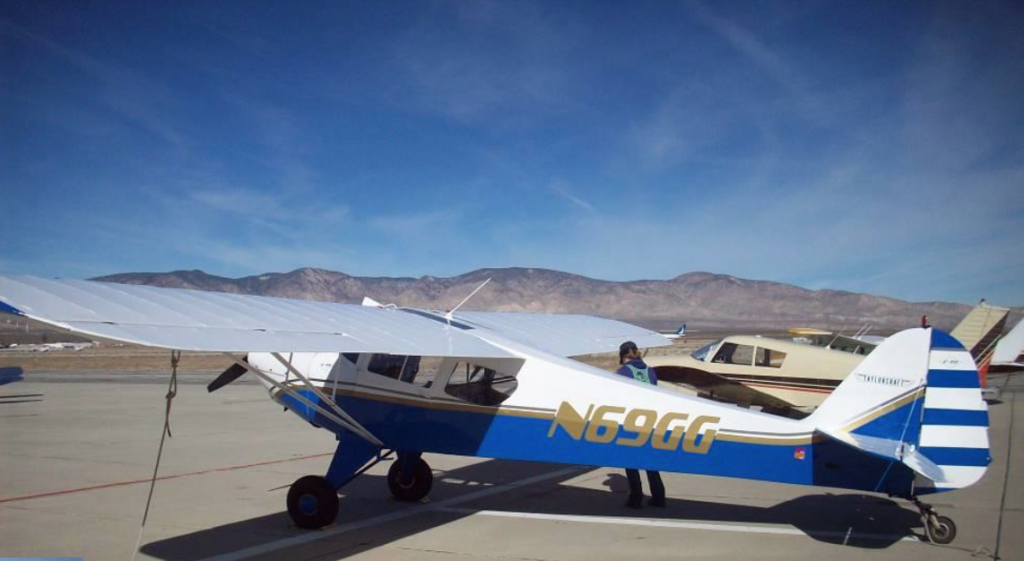 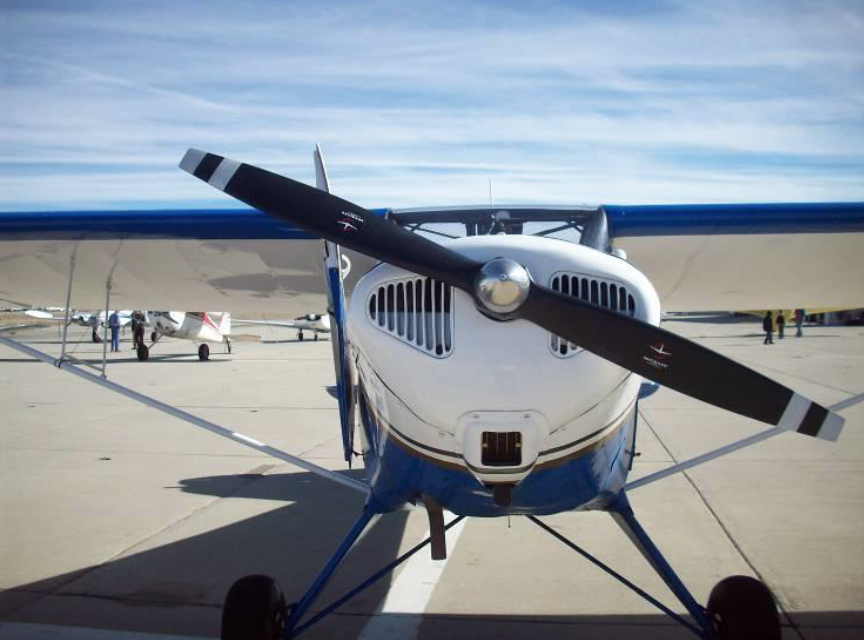 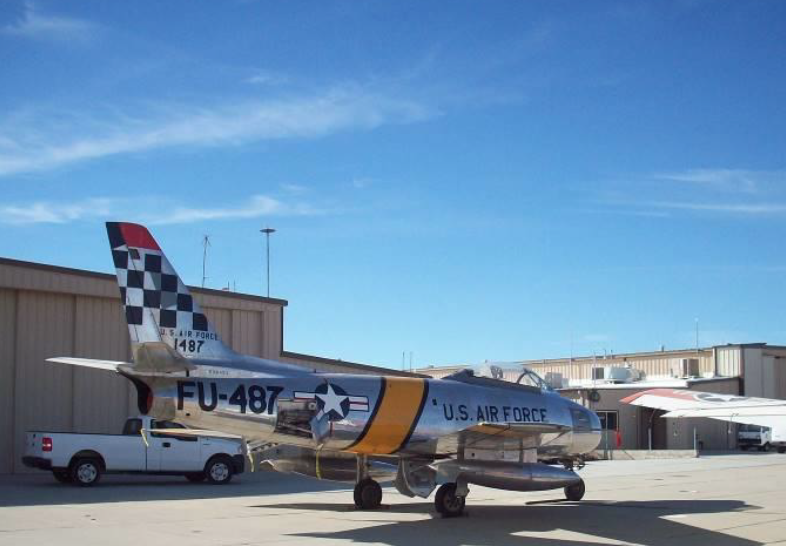 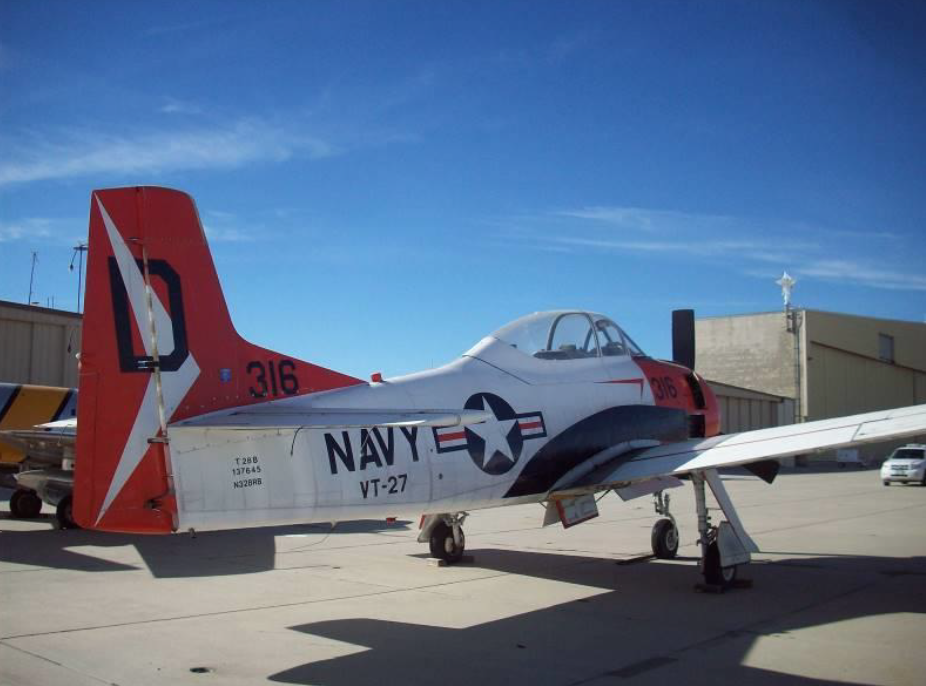 Nice twin Cessna 310 sitting on the ramp looks like she’s ready to go! 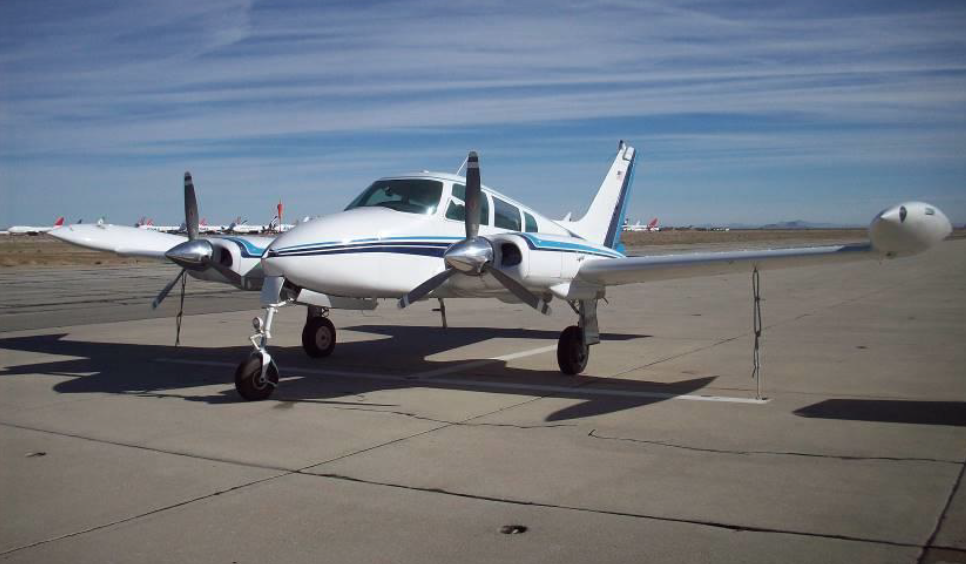 Here’s a 2015 Light Sport Sinus by Pipinstrel owned by John Luswick. Wingspan was a little too wide to get through the aircraft lined up, so he chose a spot on the end of a row. Sinus 912 (That’s pronounced seen-us, not sine-us). The Pipistrel line of aircraft is imported into the US by Pipistrel USA. 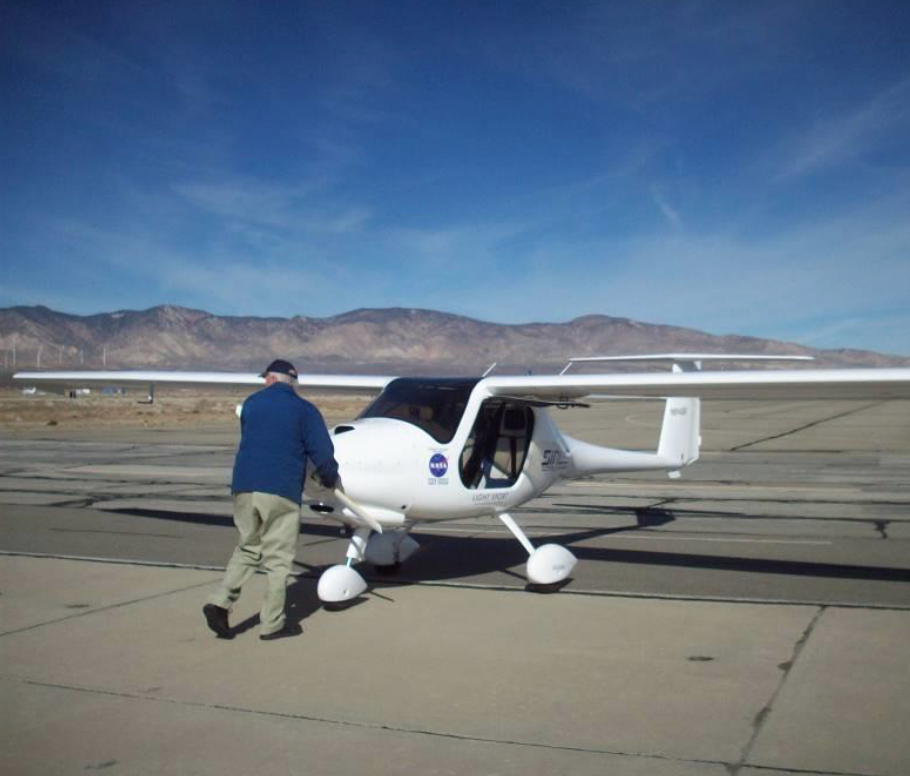 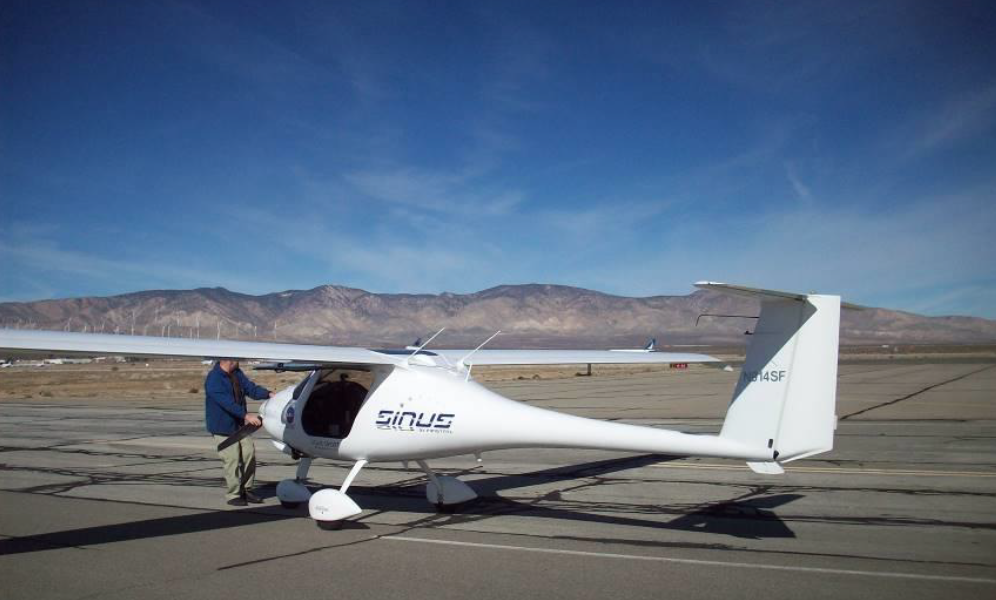 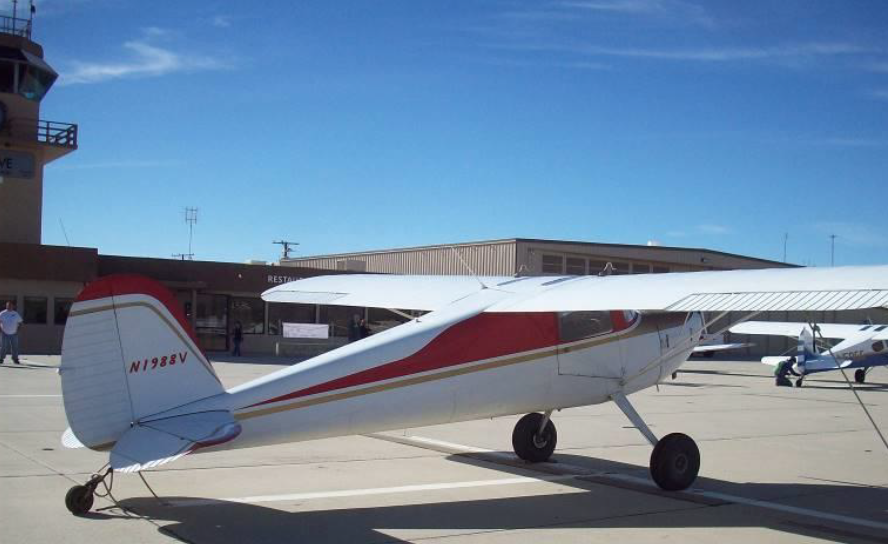 Jared Smith flew his 1946 Globe Swift to Mojave from Huntington Beach. The birthplace of the Swift was Ft. Worth, TX, in early 1940. The very first low wing, two-place retractable gear aircraft called “The Swift” was built as what would be called today a “homebuilt,” by Mr. R.S. “Pop” Johnson of Ft. Worth. 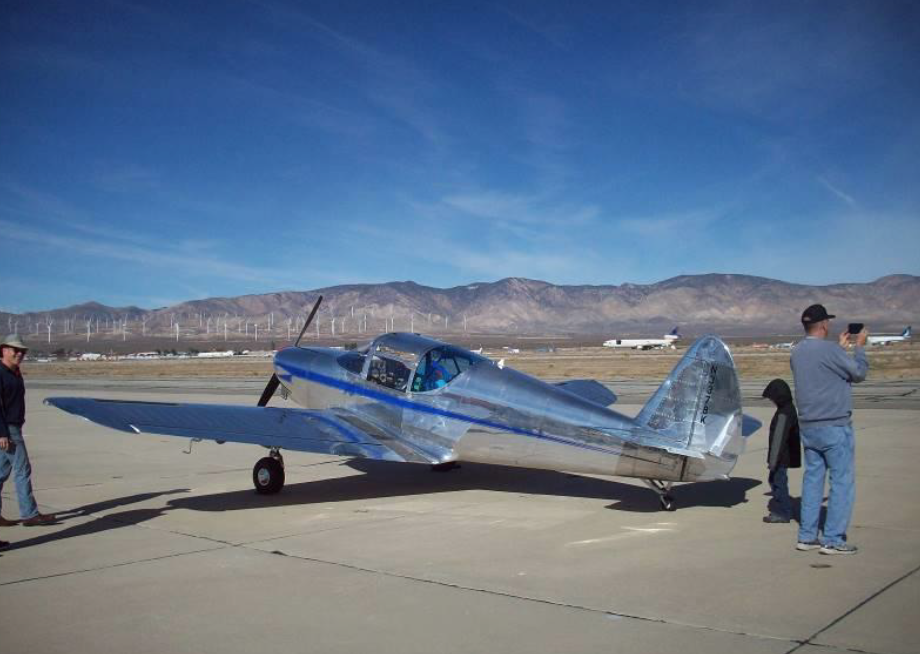 Joe and Zanya Biviano after the presentation answered questions and visited with members of the Antelope Valley Ninety-Nines. 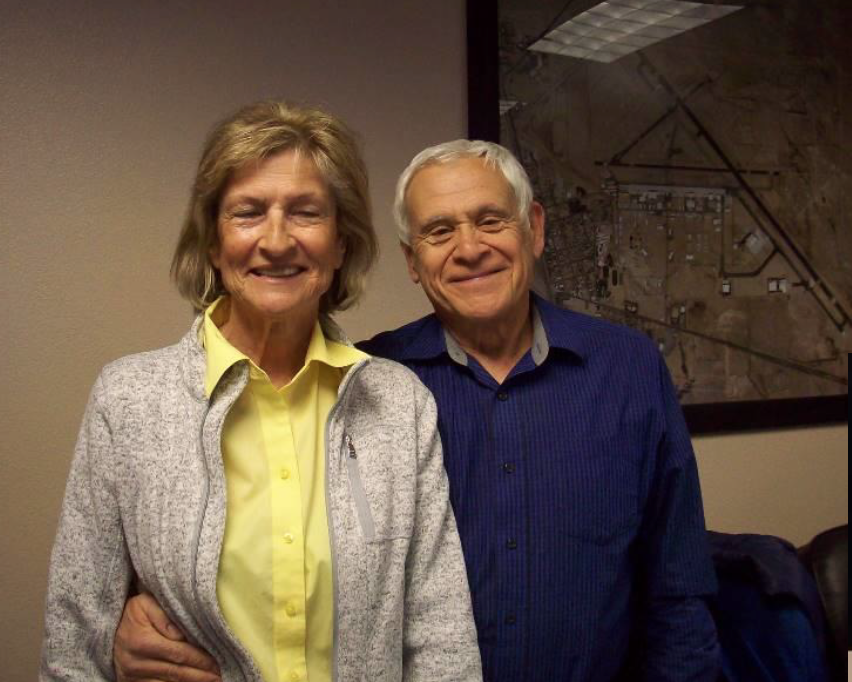 After the presentation, Joe took Field Representative Bryan Anguiano from Assemblyman Tom Lackey’s office for his first airplane ride! Bryan looks happy and wants to get his pilot’s license now! 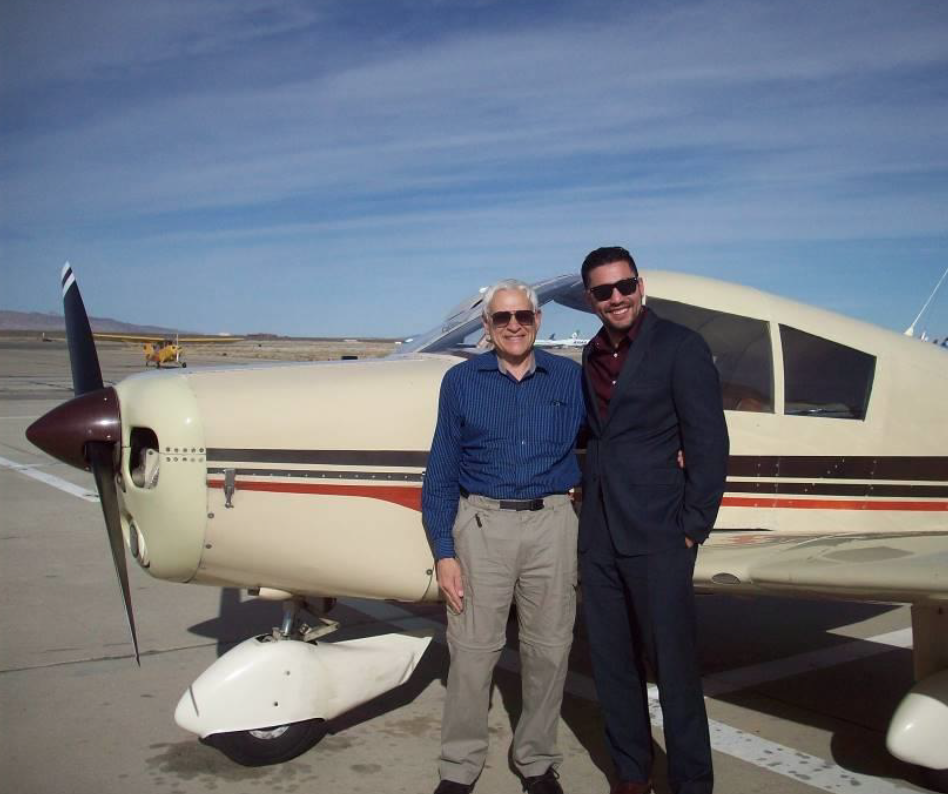 Biviano was presented with a Voyager shirt from Cathy Hansen and Voyager pilot, Dick Rutan. 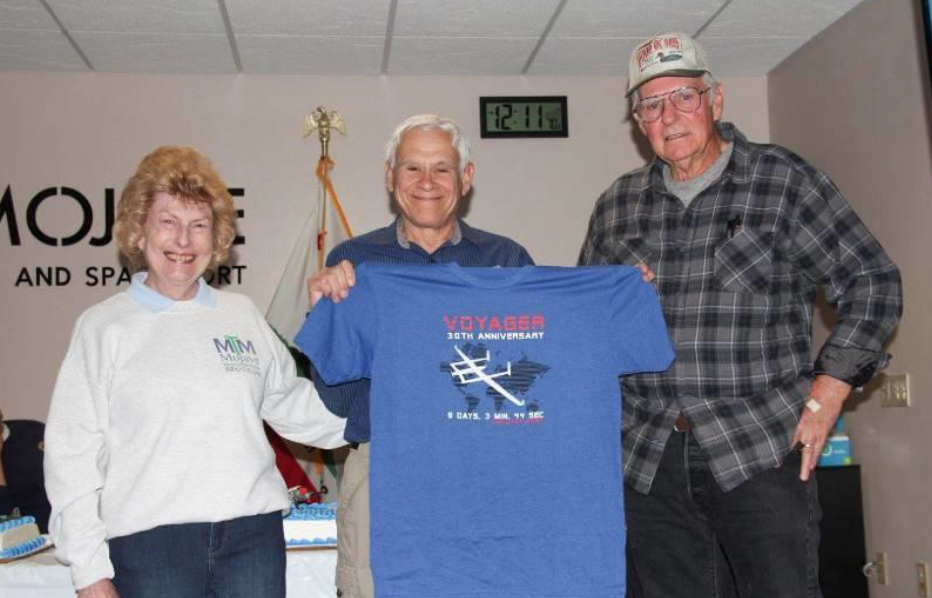