Another cold and windy day for Plane Crazy Saturday! Only one airplane flew in to MHV! Barb and Phil Schultz brought their gorgeous 1958 Beech 18 in, but no one else wanted to venture out in the skies with the nasty weather!

On January 15, 1937, the Beechcraft Model 18 made its first demonstration flight at the factory in Wichita, Kansas, and it continued in production for thirty-two years. The low-wing, all-metal, twin-engine monoplane was originally intended as a six-to-eight-passenger executive or feeder airline transport. As the years passed, however, the Model 18 was adapted to many uses and, in all, thirty two different versions were produced. 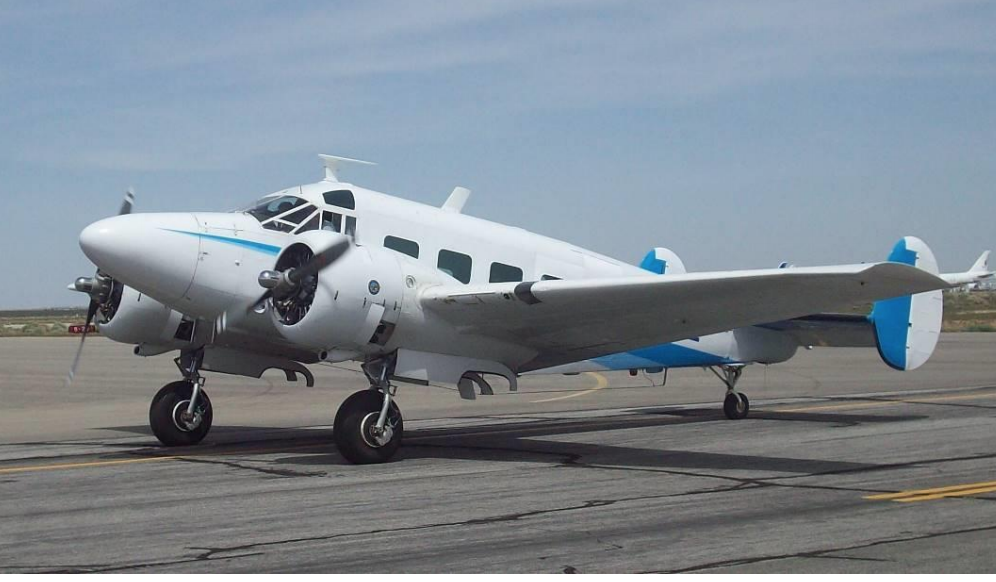 In spite of the harsh weather, the MASP Board Room was packed for Dan Yost’s presentation about flying the DeHavilland Canada, DHC-4 or C-7 Caribou in Vietnam for the U.S. Air Force. Yost graduated from the U.S. Air Force Flight School in November 1956 and was assigned to B-47s at Schilling AFB in Salina, KS from April 1957 to June 1965. He flew B-47s for eight years. Two years as Co-Pilot and six years as an Aircraft Commander.(Yost gave a Plane Crazy Saturday presentation about the B-47 in 2015.) In 1965 through 1967 he was stationed at Perrin AFB in Denison, TX flying T-33s and their one and only C-47. He was sent to Vietnam is May 1968 and was assigned to fly the C-7A Caribou.

The Caribou was a short takeoff and landing cargo aircraft originally purchased by the U.S. Army. “What made this bird a STOL aircraft were the full-span flaps that extended the full length of the wing and the reversible props,” said Yost. From May 1968 to May 1969, Yost flew with the 537th Tactical Airlift Squadron (TAS) and was part of the 483rd Tactical Airlift Wing (TAW). The wing was made up of six squadrons with 15 aircraft each, and 25 three man crews. He logged 1,165 hours in the Caribou, flying 169 missions, based at Phu Cat Air Base.

His U.S. Air Force squadron wing was activated in 1967 and took over the DeHavilland C-7 Caribou aircraft that were formerly operated by the 17th Aviation Company of the U.S. Army in South Vietnam. This STOL (short takeoff and landing) aircraft was perfect for the short, unmaintained runways in Vietnam. The 537th earned a Navy Presidential Unit Citation, as well as an Air Force Presidential Unit Citation for tactical airlift support operations in forward bases in Vietnam from January to May 1968. It earned a second Air Force Presidential Unit Citation for action between April and June 1970. He told how the indigenous peoples of the Central Highlands of Vietnam, called Montagnard’s would only eat meat that they killed themselves. Yost and other crews would fly cattle and pigs in crates for the people and in exchange the Montagnard men would fight. “They were good fighters,” Yost said. 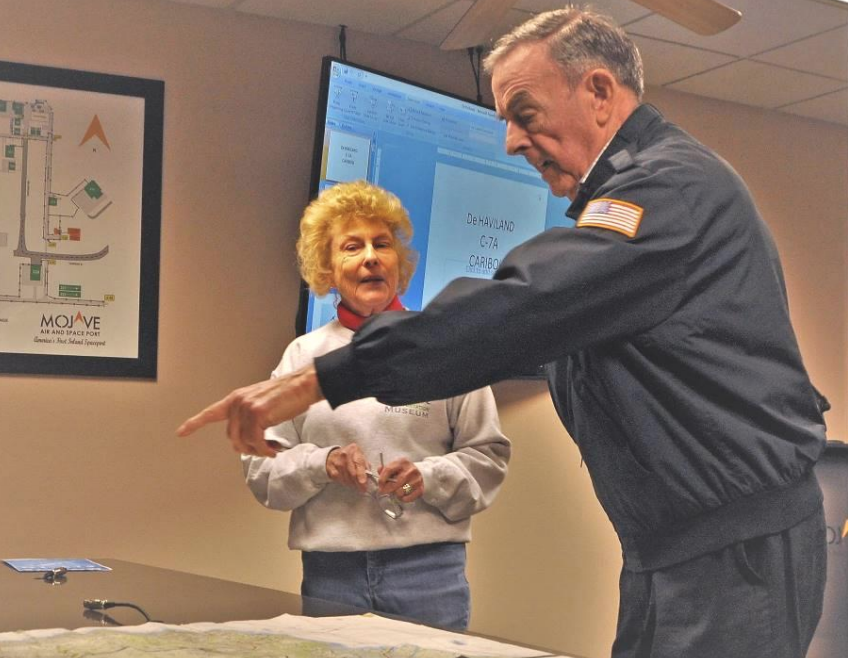 He also told a story about writing to his mother and asking if some of the ladies at church might send clothes for the children. His dear mother gathered children’s clothes from four churches in his hometown and sent them over for him to distribute to families. He showed photos of little girls showing their new clothes, complete with hats. 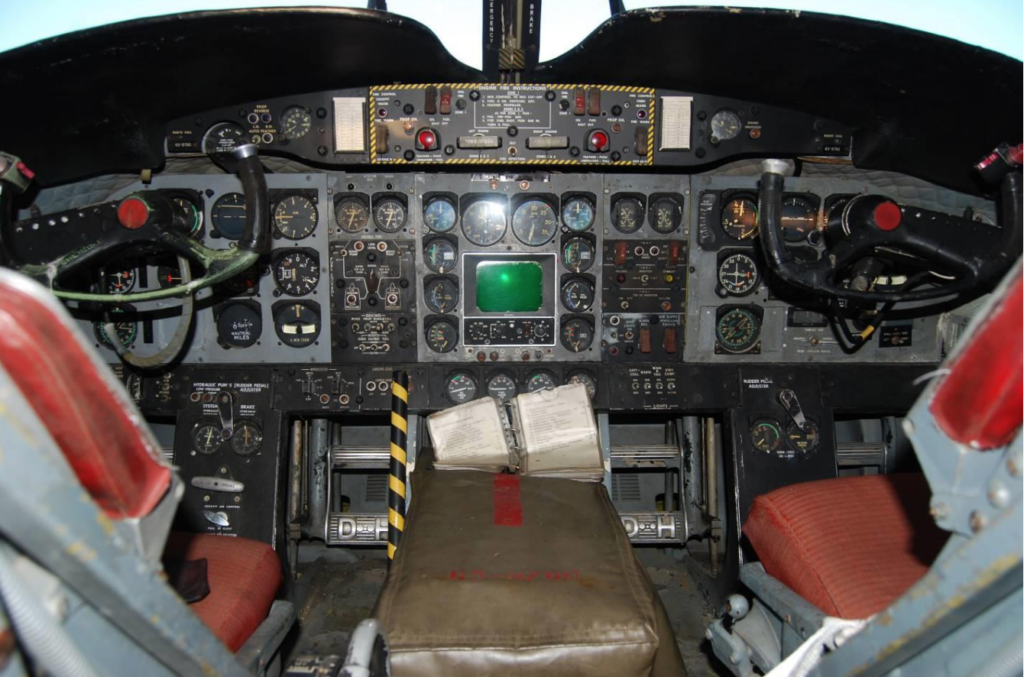 This photo shows the uncluttered instrument panel. The throttle quadrant was mounted overhead with the mixture and pitch controls. Also on the overhead console is the landing gear lever and just behind the engine controls is the aileron trim, ignition switches, flap control lever, and carburetor air-temperature control lever. The Caribou is powered by two Pratt and Whitney Twin Wasp R-2000-7M2 engines. It has a maximum gross weight of 28,500 pounds and can carry 31 passengers or 25 fully equipped paratroops. After serving for 21 years, Dan Yost retired from the USAF in 1977. 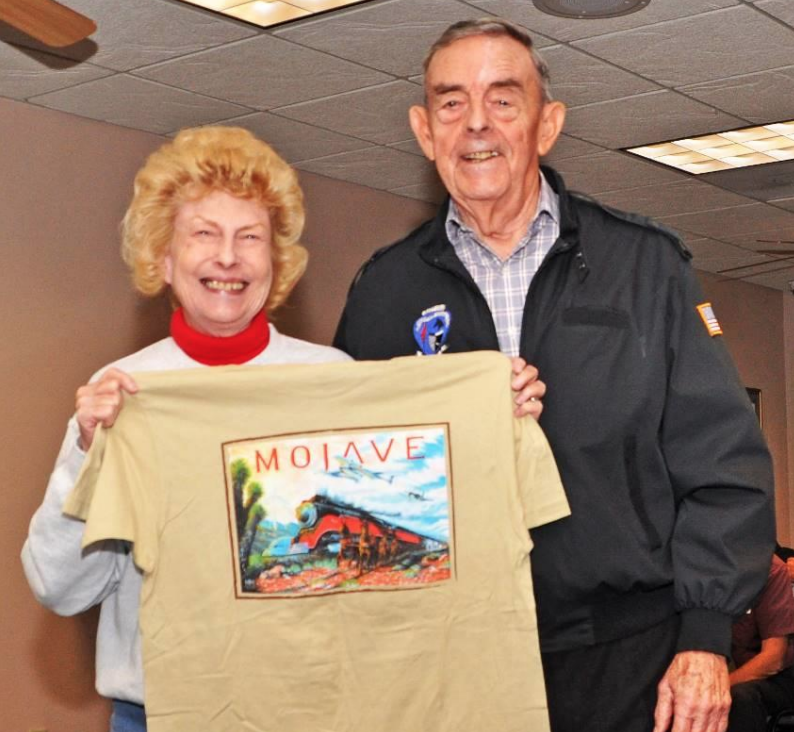